Parents all over the world find themselves struggling to figure out what to feed their children. In Canada alone, 25-35% of parents have described their children to be “picky eaters” at one time or another (Canadian Paediatric Society, 2012). Despite having two or three options available (which is the average number of choices that kids get per meal), the response is usually something along the lines of, “no”, “eww”, or simply refusing to eat. How many times have you heard parents say, “Just try it”? Although seemingly harmless, this request can actually be quite detrimental.

The last thing that we want children to feel is a sense of failure. While effort is often praised, in the case of “trying” food, there’s either clear success, which is actually eating the food, or obvious failure, which is basically anything else. To me, an occupational therapist, this request is simply too demanding. A big part of my job is enabling success by creating attainable and realistic goals. As such, I’ve come up with these fun ways to ease children into “trying” new or non-preferred foods.

A snake taste is simply licking the food. I first tell the child to imagine what a snake looks like, and then have them demonstrate the quick tongue protrusion that snakes do. Once comfortable, I’ll ask the child to snake taste the food in question, reinforcing that they do not have to actually eat it. You’d be surprised how compliant children tend to be with this simple request. More often than not, it results in the child taking an actual bite, either right after the snake taste, or at another time. 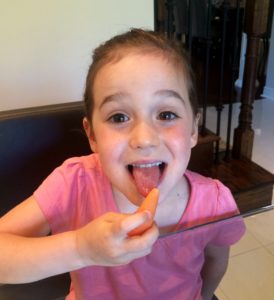 A bunny bite is essentially a tiny nibble of food. I first tell the child to imagine what a bunny looks like eating a carrot (holding onto it with both paws and taking small bites), and then have them demonstrate this (sometimes using a preferred food). Once comfortable, I’ll ask the child to bunny bite the food in question, reinforcing that it is a very small amount, and that they’re not expected to eat the entire thing. Again, its shocking how agreeable children are with this simple request, especially after they’ve snake tasted it. 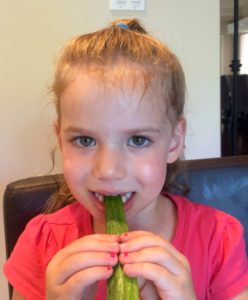 Snake tastes and bunny bites are fun and relatable to children, act as the beginning of the “trying” process, and, most importantly, can (usually) be achieved. It takes the pressure off of actually eating the food, while proving to the child that they can successfully attempt it. Snake tastes and bunny bites also support the sensory challenges that so many children face, allowing the child to interact with the food (while also smelling and touching it), improving their overall tolerance towards it.

In summary, rather than pushing your picky eater to “Just try it”, remain mindful of the fact that you want to promote success, and attempt attainable goals, such as snake tastes or bunny bites. If there’s something different that is more relatable to your child, try it that way – it’s all about being creative!

If you have any questions about your child’s eating habits, feel free to contact one of our occupational therapists or dietitians at Boomerang Health.