Getting Better at Sounds and Letters

Learning letters and sounds can be very challenging for young children and can be equally as difficult for parents who are trying to teach these concepts. Keep the following tips in mind and always try to personalize your lessons to make them most effective for your child!

The best learning happens when children are having fun! Incorporate letters and sounds into play to ensure that the concepts are being taught in an engaging way. When playing with your child’s favourite toys, emphasize the letters and sounds of associated words. For example, during bubble play, emphasize the letter ‘b’ in “bubble” and ‘p’ in “pop”. Drawing attention to these sounds can also heighten your child’s awareness to sounds in words. Phrases such as “I hear a ‘b’ at the beginning of ‘bubble’” and “I hear a ‘p’ in ‘pop’” can be very helpful.

When working on letters and sounds with my clients, I find it extremely helpful to use visuals to support their learning. Some letters “say their own sound”, for example, the letter ‘p’ says its own sound, as does ‘b’, ‘k’, ‘t’ and several others. For many of the letters, however, the sounds they make are not as transparent. Consider the letter ‘c’ which most often makes a ‘k’ sound, as in “cat”, “can”, “colour” etc. This letter and several others do not “say their own sound” and these are typically the most challenging for children to learn. Visuals are extremely helpful for these “non-transparent sounds”. I have included a few of my many visuals below. When considering using visuals, think about what your child enjoys and what he or she is most likely to remember. The more personal the visuals are, the more useful they will be for your child. A reading program called “Lively Letters” (http://www.readingwithtlc.com/lively-letters.html) incorporates visuals and stories for each of the letters to teach the associated sounds. Being creative is a great way to teach these tricky letters and sounds! 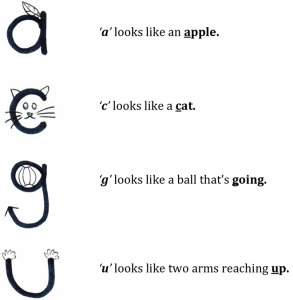 Making sound effects and emphasizing sounds can be a great way to teach letter-sound correspondences. Teaching children to listen for the “loudest” or “longest” part of a letter can give them a clue about the sound it makes. This is a helpful technique for letters such as “f”, “m”, “s” and others where the sound is embedded within the letter name but not the initial sound of the letter name (for example, ‘m’ is pronounced ‘emm’; ‘s’ is pronounced ‘ess’). I often prolong the “sound” portion of the letter, for example “emmmmmm” for ‘m’; “essssssssss” for ‘s’, and make the “sound” portion louder when I say these letters. This should heighten your child’s awareness of these sounds and help them to point them out within letter names.

Working on sounds and letters can be made fun and relevant for your child. Picking one key letter to work on each week can increase exposure to letters and sounds and will allow for repetitive practice.

Lauren is a compassionate and dedicated speech-language pathologist with a diverse range of clinical experience assisting children and adolescents with special needs and developmental disorders as well as communication difficulties including articulation and phonological disorders, developmental and acquired language disorders, fluency disorders, voice disorders, and motor speech disorders. With experience working in both community and clinical settings, Lauren values the importance of collaboration with families and other health care professionals in order to provide patient-centred care.