Home/Blog/Speech-Language Pathology/Changing the Channel: A Guide to Using Television to Support Language Development

Changing the Channel: A Guide to Using Television to Support Language Development

Parents often ask me whether watching television will help or hinder their child’s language development. Unfortunately, the answer to these questions is not as simple as “yes” or “no”. For young children who are beginning to learn language and are using single words or two-word phrases to communicate, it can be difficult to extract new vocabulary from television shows when the characters are using full sentences and often, a fast rate of speech. That being said, the ideas and topics explored in these shows are often relevant and important and the interactions between characters provide a great model of conversational speech and social turn-taking. For these reasons, television can be made into a language-learning activity with a few strategies in mind.

Get Down to your Child’s Level

For older children who might wish to discuss the shows that they have watched, you can help them to do so by making it easier for them to recall important information. This information may be related to the characters and main ideas depicted in the television show. Drawing pictures of the characters or printing them from the internet can help with labeling their names and characteristics. Drawing a visual representation of the main idea in the show can also help with discussing the content. Sometimes I suggest using a concept web (see below) to address details related to a specific topic. If the television show of choice is “Paw Patrol”, the characters can be written out and a picture of each can be drawn beside their names. Other information about the show can be added to the web, such as “rescue”, “save”, “mission”, with accompanying pictures. This will help to guide discussions about the show and will help your child to focus on the key components. 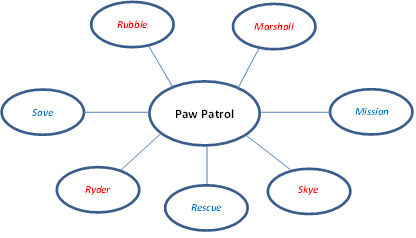 In order to encourage a discussion about the details of the television shows that your child is watching, ask specific questions. Asking general questions such as “How was Paw Patrol” will likely yield vague responses. Instead, focus on the important components of the show, such as “who” the characters are, “where” the show takes place, “what” the mission of the show is, and “how” the mission is accomplished. You can also offer your comments on these various topics to add to the conversation and model appropriate responses to these questions.

With these tips in mind, watching television can be an educational activity and one that lends itself to a variety of language-learning opportunities. Happy watching!

Lauren is a compassionate and dedicated speech-language pathologist with a diverse range of clinical experience assisting children and adolescents with special needs and developmental disorders as well as communication difficulties including articulation and phonological disorders, developmental and acquired language disorders, fluency disorders, voice disorders, and motor speech disorders. With experience working in both community and clinical settings, Lauren values the importance of collaboration with families and other health care professionals in order to provide patient-centred care.